I had to spend time promoting the show, telling people about it, meeting up with people who wanted to see it.  Oh boy!!! This one required a lot of project management skills.

I’m Grateful to So Many

I want to say thank you to Stephen Kobasa, Mara Lavitt and Colleen Carol for making this exhibit at Atticus happen.  I also want to thank all of you who went to view the exhibit at Atticus.  It was a pleasure to meet so many of you.  Your kind words, your admiration of my work, the time that you invested in coming out to see the exhibit has truly inspired me.

On the first scheduled meet and greet, a cycling race was routed right in front of Atticus. I was concerned folks will not show up for the meet and greet because of the race and traffic.  But you guys showed up!!! I appreciate you for doing so. 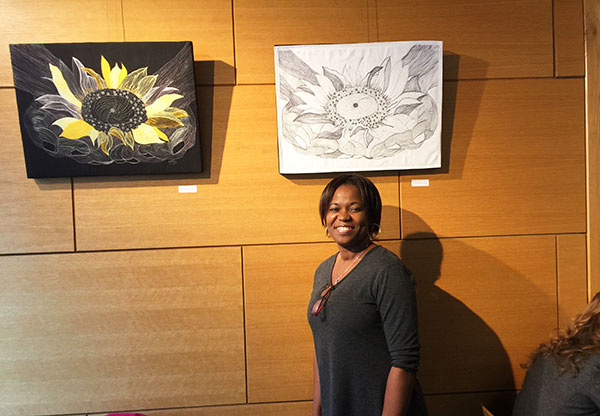 Thanks to you my readers. Although many of you live too far away to come see the exhibit in person, you were all so encouraging. The blog post in which I announced the opening of my exhibit at Atticus is one of the most commented on posts on this blog. THANK YOU. I appreciate all your well wishes. I want you to know that they carried me through the exhibition.

I’m a better professional Textile Artist for having gone through this process.  The exhibit at Atticus has taught me so many things about being an independent artist, curating art, organizing art shows, promotions, press releases, and much more. I look forward to sharing more about these experiences with you later.

For now, I can’t wait to see what awaits me after the exhibit at Atticus.