Episode 27 is entitled “Lemonade Makers #3”. It’s a variation on the drawing in episode 19, with a different color palette.  As though, this piece wanted to live up to its name, I had a couple of challenges with creating it. I ended up having to find a way to make lemonade out of the lemons I’d stitched. Making sewing mistakes is common place with any sewing project. In fact, many people who don’t care so much for sewing are really frustrated by the sewing mistakes they make when they sew, not because they find sewing itself to be so difficult.

There are several ways we can avoid making sewing mistakes.  One of those is to follow a plan or pattern and another is to make time for the sewing project at hand. Many times we neglect to give ourselves sufficient time or we decide to wing something that is complex. In this case, I’m guilty on both accounts.

Although sewing mistakes have halted many a sewing project in their tracks, many of these mistakes can be corrected with a little creativity. My mistakes in this project stemmed from me not looking at my original sketch while I was stitching – maybe a case of over-confidence since I’d stitched this particular sketch before.

Here’s the original sketch from episode 19.  I’m sure you recognize it.

The mistakes I made were …, shall we say, “mistakes of omission”. I forgot to show the drinking glass half empty as in the original sketch. I also omitted the leaf from one of the lemons in the bowl. The second mistake could be easily taken care of by adding the leaf back in. So I wasn’t very concerned with that one.

The first one was a concern because I’d stitched in a place I shouldn’t have. But I wasn’t about to let my sewing mistakes get the better of me. There was absolutely NO WAY I was going to consider taking out stitches.  I don’t know about you, but I hate taking out stitches. It takes about ten times more time to rip stitches out than it takes to sew them in. (Ok, that may be an exaggeration. But ripping stitches is certainly unpleasant!! 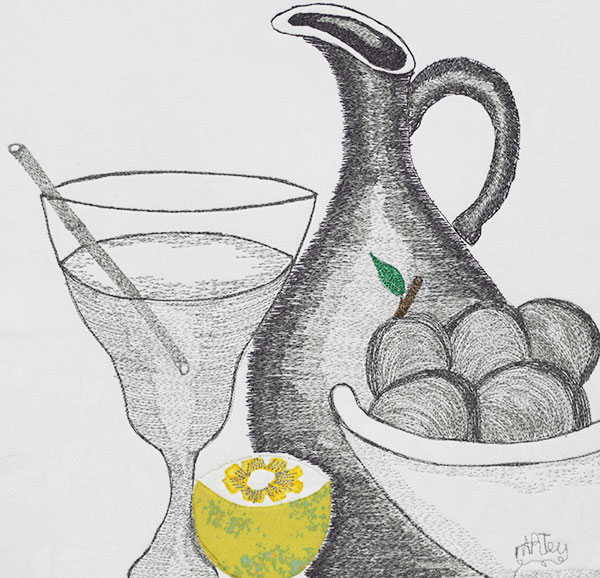 That solved my sewing mistakes, somewhat. The final proportions of my jar in relation to the drinking glass were off. Lesson learned – refer to the original sketch or pattern periodically. That way, you can catch sewing mistakes before you’re far gone with your mistake.

On the other hand, if you do get caught with serious sewing mistakes, don’t throw your work in the bin.  Think creatively, you’re bound to come up with a less unpleasant way of getting yourself out of the ditch.

The key to solving sewing mistakes is not to grab your seam ripper first but to think creatively first.

Questions: Do sewing mistakes get you frustrated to the point where you give up on a project? What are some of your favorite ways of solving sewing mistakes? Start a conversation in the comments section. See you there.

Watch and read about the entire Stitch The Sketch series.