For starters, that phrase implies when you’re making connections, then the items or things you’re connecting are seemingly unrelated. Right?

Secondly, it means that you’re creating new ideas from things that already exist. This, I think is fun stuff. Because you don’t ever have to be short of inspiration to create.

Simply by making connections between things you already know, you can create something new. There’s no need to pull stuff from thin air.

That’s exactly what happened to me in my studio practice this week.  I didn’t set out to go making connections between anything.  But as I worked, I kept noticing that I was drawing from other areas of my life experiences to create. 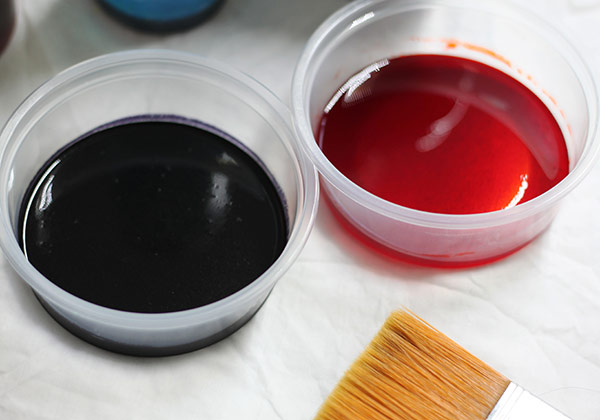 It brought to mind a famous quote, Steve Jobs had said in an interview several years ago.

Creativity is just connecting things. When you ask creative people how they did something, they feel a little guilty because they didn’t really do it, they just saw something. It seemed obvious to them after a while. That’s because they were able to connect experiences they’ve had and synthesize new things.

When I was pregnant with my oldest son, I was so excited about the prospect of having a new baby that I went to great lengths to prepare for him.  One of the things I did was to paint his nursery. In the process, I learned to use painter’s tape to create lines and patterns when painting.

So when I was looking for something interesting to do with fabric, I remembered that experience.  Therefore, I started making the connections between how I executed that job and how it could be done on fabric

I first created a wrinkled paper effect by soaking a piece of fabric in soda ash solution for about 10 minutes. Then I poured some gray dye solution onto it. Squeezing, and scrunching the fabric to increase the wrinkles, I left it to batch. 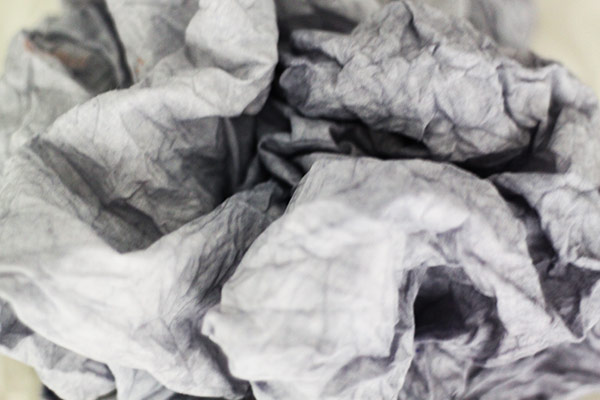 Now, I needed to come up with a pattern to use.  Borrowing from one of my favorite traditional (or maybe not so traditional) quilt patterns is the crazy quilt pattern.  So I chose that.

Now that I was done making the connections between a quilt pattern and my background fabric, I needed to figure out the painting technique.  I had in mind a dry brush effect, where the bristles of the paintbrush will create a scratching effect on my fabric.

To get the dry-brush effect where you have parallel lines with spaces in between, I brushed small amounts of the dye concentrate onto my fabric. This way, I didn’t have dye soaking through the fabric.

Here’s the fabric after painting.

I had to wash the fabric to get rid of the excess dyes.  At this point, I missed using acrylic paints.  Because if I’d used acrylics,  wouldn’t have needed to wash them out.

Moving further along the lines of making connections between things in my experience. I knew that in fabric dyeing you need to have the dyed fabric be moist as it batches so the dyes can fix. In painting, that’s not necessary.  The acrylics can dry as soon as possible without any problems.

Since I wasn’t soaking my fabric with paint, it dried as I went along painting. So I worried that I’ll lose all color after washing in mild detergent.

Here’s how it looks after coming out of the wash:

It lost some color but it wasn’t terrible.  It actually turned out great. I was originally worried that it’d come out too saturated. Then I’ll have difficulties defining foregrounds and background. I also like the shibori dye look.

Next week, I’ll show you what I created wth this adventure of making connections.

How about making connections of your own today? What can you create out of some old ideas? Do share in the comments below.