A negative space is the space that surrounds the subject in a piece of artwork.  It’s easy to forget or ignore the negative space when designing artwork.  And that’s exactly what I’d been doing for the past couple of weeks since I started working on the circular blocks series. I’ve been so intent on finding out different ways to present circles that I’ve completely ignored the negative space around them. So in this series, I set out to rectify that. 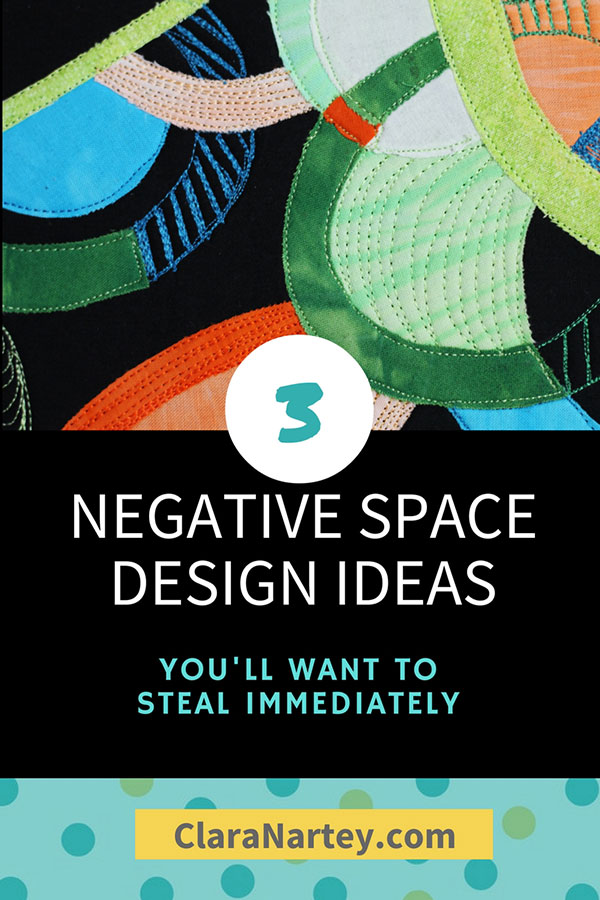 To achieve a more interesting design where the negative space is not an after -thought but, planned for and incorporated in the design, I chose to use different color fabric collages in the negative spaces. When previously, I’d have simply left them bare.

Highlighting the negative space in only certain areas and not everywhere in the entire piece really added some mystery and interest to the piece this time.  I think that the reason, the negative space in this piece had such an impact is because the subject (circles) is predictable and you can easily follow their curvature with your eyes. However, with the negative spaces, you can never tell what you’ll get.  The negative space that is created depends on the sizes, shapes, and arrangement of the shapes of the neighboring circles.

In the same vein of exploring negative spaces, I experimented with a shading technique which didn’t involve stitching closely together.  Rather, I stitched thick parallel lines a little distance apart from each other.  Thus allowing the space in between the lines to show and be part of the design. This in my opinion also worked well in adding interest to the design.

Finally, working along the same lines of focusing on negative spaces, I approached dividing the entire workspace differently. I allowed a lot of the background fabric to be left alone in the lower third of the piece. I used a narrow piece of fabric collage to form a diagonal line to add movement to that space and left that space entirely free of any art elements.

You’d notice that in this piece I did go back to one of my favorite color palettes – blue and orange.  And let’s just say I wasn’t at all disappointed with my choice of colors.

I’ve got  the video below for you to see how I stitched it all together.

Question:  Have you considered focusing on negative spaces in your artwork?